Here's what you need to know

A suction, or aspiration, D&C abortion is a procedure in which a suction catheter is inserted into the mother’s uterus to extract the preborn baby. Tools are then used to scrape the lining of the uterus to remove any remaining parts. This procedure is performed during the first trimester, typically during five and thirteen weeks LMP (that is five to thirteen weeks after the first day of the woman’s last menstrual period).

How is an aspiration (suction) abortion performed?

A suction, or aspiration, D&C abortion is performed in-clinic. Prior to the abortion, the woman should receive an exam that includes an ultrasound in order to confirm that she is pregnant and diagnose any complicating factors, such as a tubal, or ectopic, pregnancy. An abortionist uses metal rods or medication to dilate the woman’s cervix and gain access to the uterus, where the baby resides. The abortionist then inserts a suction catheter to vacuum the child from the womb. The suction machine has a force approximately 10 to 20 times the force of a household vacuum cleaner. The procedure is completed as the abortionist uses a sharp metal device called a curette to empty the remains of the child from the mother’s uterus.1

A follow up exam and ultrasound can be performed to help minimize the risk of incomplete abortion.2

What are the short-term and long-term risks and adverse effects of an aspiration (suction) D&C abortion?

Injury to the uterus or cervix, potentially damaging intestines, bladder, and nearby blood vessels, may occur.1 Other consequences include hemorrhage, infection, and in some cases, even death of the mother.2

An “incomplete abortion” occurs when parts of the aborted baby are left in the uterus following the abortion (approximately 1 out of 63 Suction D&C abortions is incomplete).4

Extreme pain, nausea, excessive bleeding, and even death may result from an incomplete D&C abortion. A woman may need surgery to remove the fetal body parts as well as blood transfusions and antibiotics.

Long-term, D&C abortions have caused complications in future pregnancies. One such complication that it can make it difficult to carry a future pregnancy to term. D&C abortions have been known to cause damage to the uterus or cervix, which can result in very premature births with the next pregnancies.5 The subsequent scarring to the uterus6 may increase the risk of uterine rupture during future pregnancy, which may result in death of the baby and even the mother.7,8. In addition to an increased risk of preterm birth, damage to the lining of the uterus can also cause additional problems for the woman during future deliveries, including significantly higher risk of hemorrhaging.9

How developed is the child at this point in pregnancy?

During this stage of pregnancy, the preborn child is developing rapidly. At four to five weeks LMP — that is, four to five weeks since the first day of the mother’s last period, and just two to three weeks following fertilization (conception) — the baby’s organs start to develop, and the heart begins to beat. These developmental milestones often take place before the mother even knows she is pregnant. 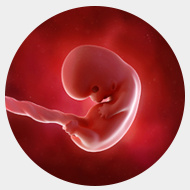 At eight weeks LMP, the preborn baby’s hands and feet are developing, and the neural pathways in her brain start to form. The child is constantly moving in the womb, although the mother cannot feel it. Source: Baby Center. 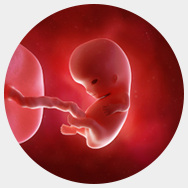 By nine weeks LMP, the child can suck her thumb, open and close her jaw, stretch, and sigh. The baby’s teeth begin to form and the heart completes dividing into four chambers. Source: Baby Center.

At week ten LMP, the child’s vital organs have developed and start to function. The baby is rapidly moving in the uterus, and tiny nails begin to form on the child’s hands and feet. Source: Baby Center. 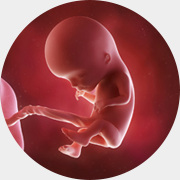 At twelve weeks LMP, the child develops reflexes, and can open and close fingers, respond to touch, and make movements with his or her mouth. The child’s nerve cells are developing rapidly. Source: Baby Center.

Please note: This website has been researched and reviewed by physicians for medical accuracy; however, it is not intended to constitute medical advice or replace the individualized counsel of a doctor.